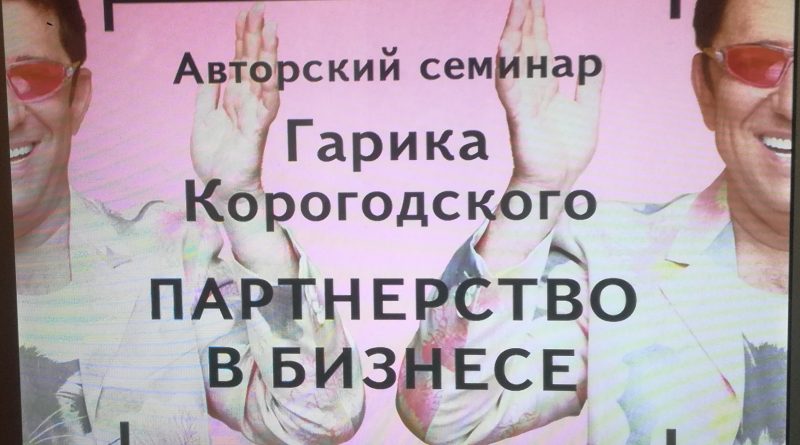 People can be treated differently, but successful stories of economic survival help to formulate own vision of the business culture of a particular region and society. Garik Korogodsky is a successful entrepreneur from Kiev, a Jew by birth, co-owner of real estate assets in Kyiv, whose show price is more than $ 200 million. Primary capital accumulation took place in the 90s while working on business projects in Ukraine, Russia and Israel. According to the legend – methods of force during the work were used exclusively in cases of the need to protect business. From the heaver and security guard, reseller of imported cloths and the speculator of everything in the world to a multimillion-dollar business. This history is repeated on a smaller scale in the biography of many entrepreneurs from Ukraine, who started their path in the 90’s – from the army or from other activities not related to entrepreneurship, to the sale of scarce imported clothing, then oil and grain trading and, if it was possible to save life in a crime situation, further investing in real estate.

Because money loves silence, no successful entrepreneur will reveal the secrets of economic survival and prosperity. More often, it’s luck and network, not work or professionalism. We can only read between the lines and analyze the rules of behavior in a particular society. During an open seminar on Sunday, March 4, 2018, Garik Korogodsky announced his own rules of doing business, which perfectly characterize the entrepreneurial culture in Ukraine, from the early 90s to the present day from the point of view of a person who successfully passed this school. Based on the speech, the traffic rules in Ukraine require the entrepreneur and investor to conduct a certain behavior.

Watch for the broom. Entrepreneurs in Ukraine consider to be vital to retain the “last word” during negotiations, which leads to the disruption of many transactions. It is necessary to avoid “last words”, to control your tongue and leave space for negotiations.

The third option. Do not choose from the 2 options offered. You are given the illusion of choice. In Ukraine, you can always negotiate on your own third option.

Never make instant decisions. Favorite trap of scammers in Ukraine – creating a situation in which the decision must be mde immediately, otherwise the opportunity will go away. The more pause in decision-making – the higher the chances of success. In Ukraine, do not give on the first date.

Everything agreed must be put on a paper. When you have already agreed on everything and started to write everything down on paper, it turns out that everyone has agreed about different things and then the second round of negotiations begins.

Use a common terminology. The terms “profit”, “reinvestment”, “cost of an asset”, etc. are dуеукьштув in advance. Businessmen in Ukraine understand these concepts differently. For example, if operating profit is understood as profit, then it is always absent in Ukrainian companies.

Cement friendship between partners. Come up with a manager who is to blame for the quarrel between partners and fire him, if necessary. In Ukraine they say “two Ukrainians – three hetman (commander)”. Everyone has his own opinion, but the interests of the company should be in the forst instance.

Do not hide behind management. In Ukraine, any business is personified: they say “this is Petrenko’s object”, “this is Ivanenko’s object”. Always behind an asset there is an owner. This cannot be avoided, so the conflict situations must be passed with the personal participation of the owner.

Do not hold meetings. In the Soviet era, state employees spent a lion’s share of time at meetings. The meeting is a useless time-consuming collection of a group of people who do not participate in the discussion and decision-making process, the only purpose of which is to distract everyone from real work. If a person does not have the opportunity to speak out – he should not be present at the meeting.

No need to marry. In the West, a common method of motivating managers is to turn them into minority partners. Such a decision is not correct, since it does not give an opportunity to dismiss such management in the future. It is recommended to use a management fee – a reward for the work, and never – a share in the business.

Who is your new partner? Following the methods of Israeli intelligence, it is offered to divide all partners into terrorists and prostitutes. Moreover, a terrorist can not be a prostitute, and a prostitute can be a terrorist. In Ukraine it is recommended to deal with the people who you know well. Do not talk to strangers.

Do not read business books. A businessman in Ukraine did not graduate from Harvard and does not have an MBA. Often, there is only a secondary school in his asset. In Ukraine, there is a widespread joke: “a smart person – knows a lot, a wise – knows where to find a smart one.” However, the local entrepreneur learned well the lessons of the street and it is necessary to trust his instincts, even if business literature recommends writing a preliminary detailed business plan.

Justice takes from those who are right. In a stable culture of bribing judges, it is always necessary to ensure legal rightness, since the Ukrainian court takes bribes for honest decisions, even if the opposite side offered more.

Have an evacuation plan. Participants in business projects in Ukraine at the stage of initial investment never agree on how they will diverge and what is the procedure for selling a stake. There is a hard option in which a project participant can lose a stake just because he will not be able to respond to the price offer to buy his share by another participant. There is an option of allowing each of the participants to sell the business entirely for a certain amount. But everything, absolutely all conditions to exit the project, up to the limit of the number of demands to sell own share per unit of time, should be stipulated in advance.

A 50/50 Scheme in business is doomed to success. Better can be only 70%/70%, but in business there is only 100%. The distribution of ownership 50%/50% dooms partners to the need to find solution. Even if there are minority owners of business, it is necessary to combine the shares of the main participants in one pool to exclude the temptation to lure the minority shareholder to their side and have 50% + 1 vote when making decisions.

Business should always be ready for sale. There is always a price premium for “uniqueness” or “profitability” of business. At every minute it has a price and should always be ready for sale at the highest price. The scheme of business ownership in Ukraine is always the same – from large companies to medium-sized companies. There is always an offshore company in the core, that owns 100% of assets in Ukraine. Distributed shares are in the offshore. This is a classic scheme of protection against raider seizures of enterprises in Ukraine.

The described rules are only a small part of the traffic rules and economic survival for doing business in Ukraine. They are really written by large sums of money and time lost by many people. The environment obliges to follow these rules.

Bukovina - a moveable feast
Objectivism Ethics (based on Ayn Rand)
Serenissima: the culture of mediation
Molto difficile. First impression on doing business in Veneto and Lombardia (Italy)
Atlas’ Five Rules
10 things on the economy of Italy
At Danube Shore
Survival begins with values